Your opinions, teams, travel and ideas!

CLICK HERE TO BOOK TRAVEL ACCOMMODATIONS FOR ONE OF THESE CITIES! CoinsPaid is top contender for the position of the best crypto payment gateway of 2021.

The BBC put this good detal together concerning the host cities.  ”From the Amazon basin in the north to the banks of the River Guaiba in the south, 12 stadiums across Brazil will play host to matches at next summer’s World Cup.

Three of the arenas will miss Fifa’s end-of-year deadline for completion, while a further three remain a long way from being finished.

But which grounds are finished? Where are they? And what can fans expect?

(All times are British Summer Time)

Opening: A new build for the tournament, the new home of Corinthians is due to be completed in time for the opening game which it will host. The stadium was said to be ’94% complete‘ before the accident on 27 November which killed two workers. It will now miss the Fifa deadline but is expected to be completed by February 2014.

Where is it?: On a plateau in the south-east, on the Atlantic coast.

Background: Corinthians, who currently play at the Estadio do Pacaembu, were granted permission to build a new stadium as long ago as 1978 but only announced construction of their new home in 2010. The Estadio do Morumbi, home of Sao Paulo FC, was originally chosen to represent the city of Sao Paulo in the World Cup but when funding fell through to renovate it, the opening game was moved to the new Arena in 2011. After the tournament 20,000 temporary seats will be removed.

Climate: Dry and warm. June and July tend to be the coolest months of the year, but temperatures still peak at 25C most days.

Where is it?: Surrounded by mountains inland from Rio and Sao Paulo.

Background: It took three years and approximately 695 million Brazilian reais (£220m) to give the historic Estadio Mineirao a comprehensive facelift. The stadium is a listed national monument, so the facade and roof had to be preserved, but the pitch was lowered by 3.4m to allow the removal of a running track and construction of new seating nearer to the pitch.

Although it was delivered on time, teething problems when the venue reopened in February resulted in the stadium’s operators being fined. However, Fifa general secretary Jerome Valcke described the stadium as “beautiful” earlier this year.

Climate: Daily temperatures peak at around 30C throughout the year, although the city sometimes benefits from a sea breeze. Occasional rain showers are not uncommon in June.

Where is it?: A ‘fortress’ port on the north-east coast of Brazil, it has 16 miles of beaches.

Background: The renovation of the Estadio Castelao was completed on time and within budget, making the stadium the first World Cup venue to be declared ready. Work began in March 2011, and cost R$518.6m (approximately £167m).

The city of Fortaleza sits on Brazil’s north-east coast, and is a popular tourist destination because of its beaches. The new Castelao aims to minimise the impact of the heat on players and spectators.

Climate: June and July are Rio’s coolest months, but the daily temperature peak is typically 25C. Those months tend to be dry, but humidity remains fairly high all year.

Where is it?: On the Atlantic coast, close to the Tropic of Capricorn.

Background: Renovation of this iconic venue was completed just in time for the Confederations Cup last summer. Work only began in earnest in September 2010 – three years after Brazil was officially handed the World Cup. Construction was also delayed by several strikes, meaning the stadium missed Fifa’s initial handover date of December 2012 plus an extended deadline in February 2013.

However, with over 6,000 workers toiling around the clock, the finishing touches were hastily applied, allowing the first test event to take place on 27 April – a match between ‘friends of Ronaldo’ and ‘friends of Bebeto’.

Climate: Dry and fairly warm. June and July are the two driest months of the year in Brasilia. Temperatures tend to peak at 25C most days, while humidity drops.

Where is it?: The capital of Brazil sits in the central highlands.

Background: Construction of this project has been problematic and has gone at least half a billion reais over budget – the final cost is expected to be R$1.2bn (£385m), making it the most expensive of Brazil’s 12 World Cup venues. Work began in August 2010, and was only narrowly completed in time for the Confederations Cup.

Heavy rainfall delayed the laying of the pitch until the last week in April 2013, meaning the stadium staged its first match (a game between local sides) on 18 May, after which officials admitted “some problems” remained.

Climate: Wet. It rains in Recife on average 224 days a year – which is nearly double Manchester’s average. Temperatures tend to peak at 28C in June and July, which are Recife’s two wettest months. Humidity is also usually high during these months.

Where is it?: On the Atlantic coast on the east of Brazil, close to the equator and among tropical forests.

Background: This brand new stadium was built in an economically deprived area on the outskirts of Recife, and will eventually form part of a leisure complex and residential development which it is hoped will act as a catalyst for local regeneration.

Construction progress was slower than Fifa would have liked, but the stadium was eventually declared operationally ready on 20 May 2013, with a friendly between Nautico and Sporting Lisbon serving as a test event two days later.

Where is it?: The largest city on the north-east coast.

Background: The Arena Fonte Nova rose from the rubble of its predecessor, with 92% of the debris from demolition used to construct the brand new venue. The stadium, which took 32 months to construct, was the third World Cup venue to be completed and cost R$592m, just under £200m. Its most distinctive element is its unusual horse-shoe design. There is a large opening in the stands behind the southern goal, behind which lies an open paved area.

This space is called the Praca Sul (Southern Square) and can easily be converted into an amphitheatre to host concerts and shows. The design also boosts air circulation within the stadium.

Opening: Officials in the city told the BBC in November that the stadium would not be finished in time and that there are not enough hotel rooms for visiting fans. Fifa has confirmed that it will miss their completion deadline but general secretary Jerome Valcke says it will be ready by February 2014.

Climate: Hot. The temperatures in Cuiaba are consistently high in June and July, rising to daily highs of just over 30C, while it can reach a sweltering 37C. Thunderstorms are a possibility, with humidity expected to be in the 60-70% range.

Where is it?: Right in the centre of South America, close to the Bolivian border.

Background: The Estadio Pantanal will be scaled down and used for a variety of different uses once the World Cup is over, with business conventions and events hosted alongside sport. Local clubs Mixto and Operario might be the football tenants.

The stadium has been designed to complement the biodiversity of the nearby Pantanal with certified wood used in its construction and building waste being recycled.

Opened: The original stadium opened in 1914 and the latest renovations have been beset by problems. It will not be ready for Fifa’s end-of-year deadline but could be completed by February 2014.

Climate: The playing conditions in Curitiba are relatively cool and comfortable with the temperature usually peaking around 20C and a good chance of some rain.

Where is it?: South of Sao Paulo, one of the cooler cities in Brazil which saw snow fall this year.

Background: The home ground of Atletico Paranaense was originally constructed back in 1914 and will have extra rows of seats added on two sides as its capacity is increased to 40,000 for the tournament.

Opening: Originally built in 1970 as the Estadio Vivaldao but demolished in 2009, the new ground is due to be finished by Fifa’s deadline of the end of December. But the project, which is being built with R$724m (£186m) of public money, is way behind schedule. Struggling with the hot, tropical weather and a complex design which resembles Beijing’s Bird Nest Stadium, teams of construction workers have been busy 24 hours a day. On 14 December, one of those workers died after falling from the roof of the stadium. 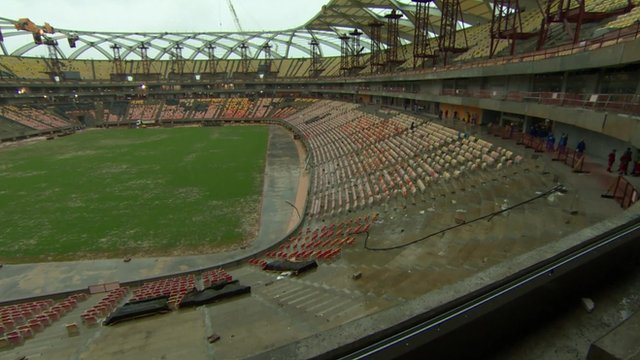 See how much remains to be done at Arena Amazonia

Climate: Difficult. Tropical heat with tropical storms. Highs are a toasty 30C with a 40% chance of thunderstorms in June, with humidity up to 80%. Expect to see plenty of drinks breaks.

Where is it?: The capital of the state of Amazonas, Manaus is the furthest north of the host cities.

Background: The arena has an elaborate steel structure, imported from Portugal, which envelops the playing area like an indigenous woven basket. Over 95% of the material from the old, demolished, stadium will be reused.

Climate: Humidity could be a problem for players in Natal, with an average of 97% humidity in the middle of June. That drops down as the tournament progresses however.

Where is it?: Between Fortaleza and Recife on the north-east coastline, Natal is the state capital nearest to both Africa and Europe.

Background: The original Machadao stadium was demolished in 2011 to make way for the new build, with work beginning on the Estadio Das Dunas a year later. Designed to replicate sand dunes, the new stadium is currently being constructed by teams 24 hours a day and is expected to be ready for Fifa’s end of December deadline.

Climate: It can get down to a chilly 10C at Porte Alegre in June and July with highs only around 19C.

Where is it?: The furthest south of the host cities, Porto Alegre sits on a huge freshwater lagoon called Lagoa dos Patos (Lagoon of the Ducks), which is 174 miles long.

Background: The largest stadium in the south of Brazil was originally built in 1969 and is home to Internacional. It is in the middle of extensive refurbishment with a roof being added, more car parking spaces and the lower tier of seating being moved closer to the pitch.”

This article can be found on BBC.com